Kobi Simmons(6-5 guard out of St. Francis High School in Atlanta, GA) and Deron Davis( 6-9 forward out of Denver, Colorado) have their memories of last year’s Adidas Eurocamp; the inaugural U.S Select team was comprised of some of America’s top high school talent, playing together against various European national teams.  Names like Dennis Smith Jr., Thon Maker, Jaylen Brown, and Brandon Ingram graced the court for the Americans, only to go 0-3 and lose by an average of almost 26 points per game. This time around, Simmons and Davis were determined to change that outcome and change history while at it.

The questions lingered about the team and how they would do coming out into this year’s tournament. Coached by Kinston, NC native and former NBA player Jerry Stackhouse, the team came out early and answered everyone’s questions. Joining Simmons & Davis this year was a bevy of talent from across the country including Edrice Adebayo (NC), Frank Jackson (UT), Rawle Alkins (NY), Mustapha Heron (CT), Braxton Blackwell (TN), TJ Leaf (CA), Mario Kegler (FL), Josh Langford (AL), and Dewan Huell (FL).

Their first test was the France 20U national team. Coming into this matchup, many questioned whether this team would play together as a unit. A majority of the ball was placed in Jaylen Brown’s hands last year as he was looked as the “go to” guy. Another adjustment faced was if they were able to avoid playing the “1 on 1” basketball their accustomed to in the states. Like France, European countries have club and junior club basketball teams during the summer, which teach fundamentals, team ball, and continuous ball movement. Lastly, the U.S team lacked age and experience. The players they faced were anywhere from 2-4 years older than them, many who also play professionally overseas. 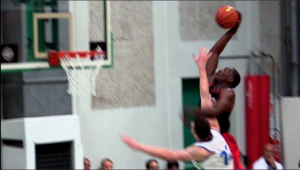 Above is Edrice Adebayo going hard to the rim.

In the first contest against France they came going shot for shot. Led by 6’4” guard Rawle Alkins (NY), the U.S was able to ride his 7-8 shooting performance to a tough 76-71 victory. This marked the first time in Eurocamp history that a U.S team had won a game. Alkins was efficient from all three levels, finishing through contact on the drive, hitting from the midrange, and knocking down his two 3-point attempts. Lone Peak (UT) guard Frank Jackson also made a nice impression playing the lead guard position for the U.S. as he went 6-12 for 13 points. 6’9” forward Edrice Adebayo was the most effective big man as he went 5-10 for 12 points.

The second matchup of the weekend pitted them against a compilation of the Eurocamp All Stars. This team was made up of players that had performed well during the first two days of camp as well as a handful of players that were entering this year’s NBA draft. Notable names included Lucas Diaz Silva (JBC International Game MVP ’12), Omar Yurt, and Dejan Todorovic. Though the team may have lacked age and size to the Eurocamp All Stars, the U.S. frontcourt of Edrice Adebayo and Deron Davis seemed to accept the challenge. The big men combined to go 12-12 FGs from the field against Diaz Silva and Yurt.  Both (Adebayo and Davis) displayed power, post moves, and finishing ability through contact to help lead the U.S. to an upset over the Eurocamp All Stars 77-68. The U.S. also saw nice contributions from Josh Langford (AL) 13 points and Frank Jackson (UT) with 12. This win was huge as they were now confident they could play with anyone at the camp. This year’s roster was serious about their time in Italy and they made a statement.

The last matchup of the weekend had them facing the Greece 19U team. Though the Greeks kept it close in the first half only down 41-29, the U.S. ultimately blew the game open in the 3rd and finished things out with a blowout score of 100-58. Four players finished in double-digit scoring led by Mustapha Heron (CT) with 15 points, Kobi Simmons (GA) with 13 points, and Rawle Alkins (NY) with 11 points. Arizona commit TJ Leaf had his best performance of the weekend as he chipped in 10 points (4-8 FGs) off the bench.

History was made this past weekend as they won their first game in Eurocamp history as well as finishing with a perfect 3-0 record. These guys were given the experience to play different competition, adjust to the euro-style game, play in front of NBA scouts, and make history. All in all, the 2015 U.S. Select Team left their mark on this year’s Adidas Eurocamp and set the standard for future teams.

Day 1 Recap Of USA Vs. France

Day 2 Recap of USA Vs. Euro All Stars/NBA Draftees

Trailer For The New 10,000 Hours Episode