Jimmy Butler was raised in a tiny town on the outskirts of Houston, without a father. If you don’t know his story, you are probably going to think the next sentence will be about how his mother helped him become the man he is today. In a way she did, but not in a way you are probably expecting. At age 13, she kicked him out of the house and left him with these words: “I don’t like the look of you. You gotta go.”

For years, Butler bounced around from one friend’s home to another until his senior year, when the mother of one of his friends took him in and made him a part of her family — a family that already had seven kids in it.

“They accepted me into their family, and it wasn’t because of basketball.” said Butler about Michelle Lambert and her family. “She was just very loving. She just did stuff like that. I couldn’t believe it.” 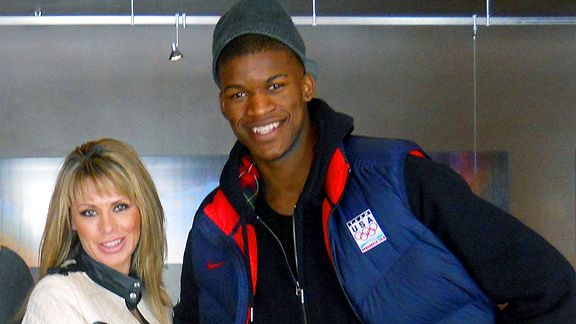 As for basketball, here’s a short summary of his unbelievable basketball journey: unknown high school player (two-star guard ranked 73rd in the state of Texas) to college player (starting with Junior college) to NBA draft pick (end of 1st round) to NBA Most Improved Player and All-Star to having shootouts with Michael Jordan. So don’t feel bad for Butler. I’m not saying that because he’s rich and famous now but because he never wanted any pity and this goes back to before he was even drafted.

“Please, I know you’re going to write something. I’m just asking you, don’t write it in a way that makes people feel sorry for me,” Butler told ESPN during a pre-draft interview. “I hate that. There’s nothing to feel sorry about. I love what happened to me. It made me who I am. I’m grateful for the challenges I’ve faced. Please, don’t make them feel sorry for me.”