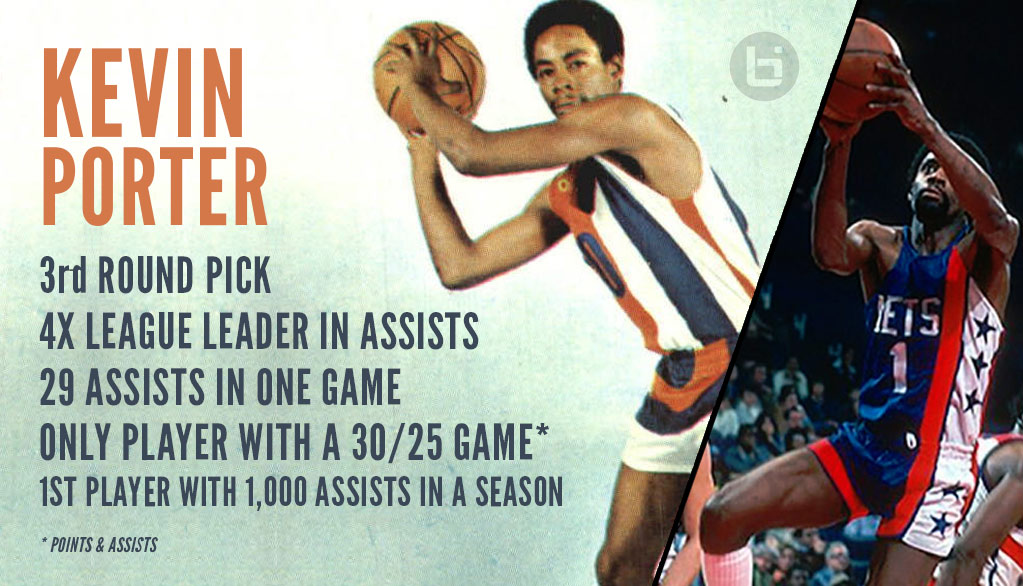 The odds are you have no idea who Kevin Porter is. Why would you? He was a third round pick in 1972 and traded every other year for 10 years, while never making an All-Star team or winning a championship. Why would we be celebrating a guy like this?

The reason why I bring up the 5’11 point guard’s name every single February 24th is because it’s the anniversary of his 14 point/29 assist performance against hall of famer Calvin Murphy and the Houston Rockets. Fluke game right? Not really. Porter is a four-time league leader in assists. You are probably thinking it must have been the style of offense the Nets were running that season. Nope. Porter has led the league in assists on all three different teams he played with: Bullets, Pistons and Nets.

Not just one of the most unappreciated passers of all-time, he could score too: averaging over 15 points a game in three of his 10 seasons and a double-double in seven. His combination of being able to dish and score really showed a year after his record breaking night in 1978, when he became the first and only player to ever put up 30 points and 25 assists in a game. Since then, only four players — John Stockton, Isiah Thomas, Jason Kidd and Scott Skiles — have put up 20/25 games. Of those, Scott Skiles 22 and 30 in 1990 broke Porter’s NBA record for most assists in a single-game.

So what happened? Why do hardcore basketball fans not know a thing about the first player in NBA history to rack up over 1,000 assists in a season. I don’t have an answer. He was plagued by injuries, but lasted 10 seasons. He never won a title, but he made it to the NBA finals and that’s more than many All-Stars can say. He’s never been nominated for the Hall of Fame, but every player with more career assists than him — Cousy, The Big O, Stockton, Nash and Kidd — are all in the Hall or heading there.

The last I heard, Porter was a phys-ed teacher at a Chicago elementary school. I can guarantee his students have no idea what he did during his NBA career but if they ever want to learn about the greatest passers in NBA history, they have the perfect teacher for the subject.