Kendall Gill has some great stories about Michael Jordan. He should. The former NBA player was born and raised in Chicago, watched a young MJ while he was in high school and during his time as a member of the very underrated Flyin’ Illini. He joined the league when MJ started winning his first championships and even ended up on a MJ poster trying to stop Jordan during his second run of NBA championships. So yeah, Kendall Gill has some stories and two quotes to sum up all of them.

Calling out the devil is one thing. Facing him is another.

But are you ever really ready? Just like marriage and having kids, how much can you actually prep before facing something that is unlike anything you have faced before? It may sound like I’m going way overboard and overrating the GOAT but if there’s one thing Gill’s stories and many other stories from former players have taught us, you can’t underestimate Jordan.

Gill’s story from today goes back to the days when the Charlotte Hornets had the scary lineup that featured Gill, Larry Johnson, Alonzo Mourning, and Mugsy Bogues.

Via Instagram
Me, Larry Johnson, and Alonzo Mourning were young upcoming guns in the league. We were feeling ourselves in this game because we were giving it to the Bulls. After this play our Wild oats quickly became shredded wheats! Alonzo had just blocked 2 of the Bulls shots. We started talking smack. I could since MJ getting mad because We were matched up against each other. I didn’t give a crap though because I was young, dumb and didn’t know any better. MJ back doored me out of the triangle offense and put Zo on his collection of posters. Lol. Moral of this story? Callin out the Devil is one thing. Facing him is another! Never tug on Superman’s cape unless you’re absolutely ready! Did you hear me Pacman?

What Gill failed to mention about the video he posted was that dunk was just 1 of 2 dunks by MJ on Alonzo in that game and that Jordan dropped 52 points that night.

I’m pretty sure Alonzo remembers both of those dunks pretty well because just recently, he was talking about Jordan and said he thought MJ could average 50 points a game today.

I know, I know, we are overrating the GOAT again, right? Well, that leads me to another Kendall Gill story about Jordan and another player who came into the league when Alonzo Mourning did: Jimmy Jackson.

The story takes place during Jackson’s temporary stop with the Nets in 97 (he’s played for 12 different teams). It’s the final game between them and the future championship Bulls and just two weeks after the Nets came away with a one-point victory over MJ (36 points) and the Bulls in New Jersey. Jackson is off to a hot start and has 20+ points on MJ in the first half. He starts to talk trash with the GOAT of trash-talking. Jordan responds by saying, “You know, you’re talking a lot of stuff to have my shoes on.”

End of that story!

As for the storyteller, it wouldn’t be right of me to end this post without sharing this video clip from an OT game in the 1998 playoffs.

If you want to hear two more great stories about why you should never talk trash to the man Reggie Miller called “Black Jesus” then read these. 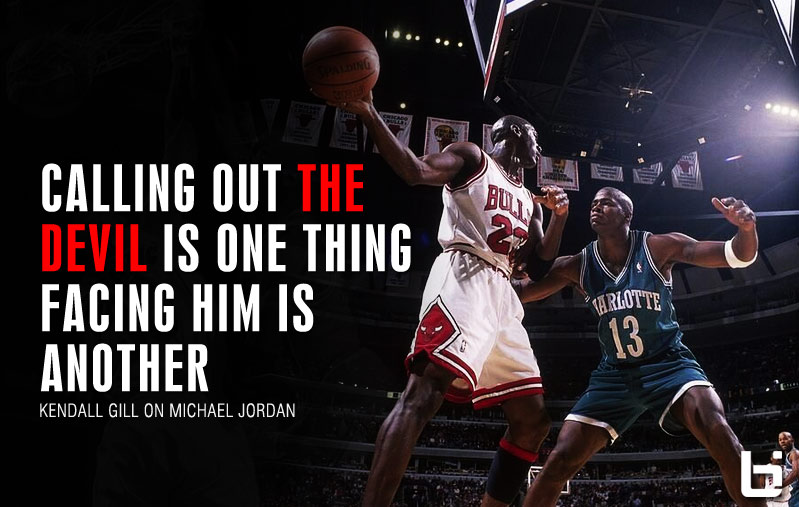