2010
“Rucker to Venice” was the theme as the event moved to the West Coast for the first time. After rain put a slight damper on the 2009 game, sunny skies and a talented group of 24 elite ballers lit up the Venice Beach Boardwalk.

Quddus “Deuce” Bello of Westchester Country Day (High Point, N.C.) got the festivities started in grand fashion by winning the Under Armour Slam Dunk Contest. Bello’s second-round dunk, in which he took an alley-oop while leaping over a seated Quincy Miller, his high school teammate, brought the crowd to its feet. Bello’s dunk also sent judges John Wall and DeMar DeRozan sprawling out of their seats to chest bump the future Baylor Bear. 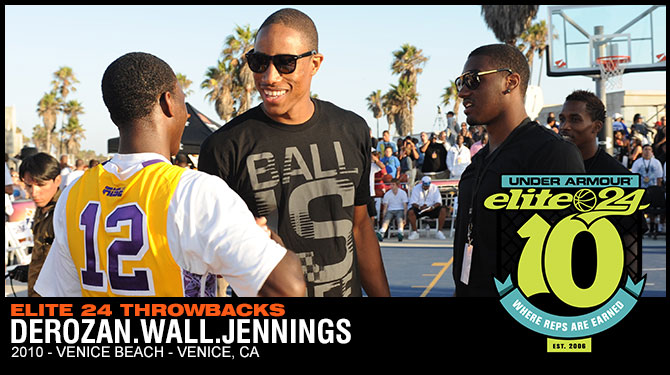 The overflow crowd was treated to a festive atmosphere and a one possession game, as Myck Kabongo of Findlay Prep (Henderson, Nev.) and Kyle Wiltjer of Jesuit (Portland, Ore.) led the Raymond Lewis Squad over the Marques Johnson Squad, 131-128.

2011
In its second year in Los Angeles, the Boost Mobile Elite 24 had more star power than ever. The Venice Beach court side seats were packed with well-connected names from the sports and entertainment industry — including Academy Award-winning actor Jamie Foxx providing stand-up commentary. 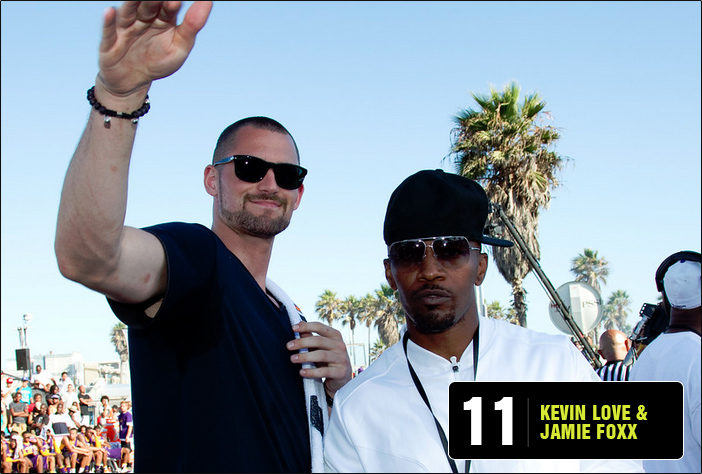 Shaquille Johnson of Milton (Milton, Ga.) kicked off the event by winning the Under Armour Slam Dunk Contest. Johnson figured he’d have to outclass high flyers such as Savon Goodman of Constitution (Philadelphia, Pa.) and Justin Anderson of Montrose Christian (Rockville, Md.) to win, but he never figured he’d have to defeat a NBA player.

That’s exactly what Johnson accomplished, using three perfect scores to defeat Goodman and the Minnesota Timberwolves’ Derrick Williams, the No. 2 overall pick of the 2011 NBA Draft.

Forty-eight minutes before the start of the game before an overflow crowd and live ESPNU television audience, Mitch McGary of Brewster Academy (Wolfeboro, N.H.) took a between-the-legs-off-the-backboard lob from Aquille Carr of Patterson (Baltimore, Md.) and shattered the backboard into hundreds pieces, sending the players and capacity crowd into a state of pandemonium. 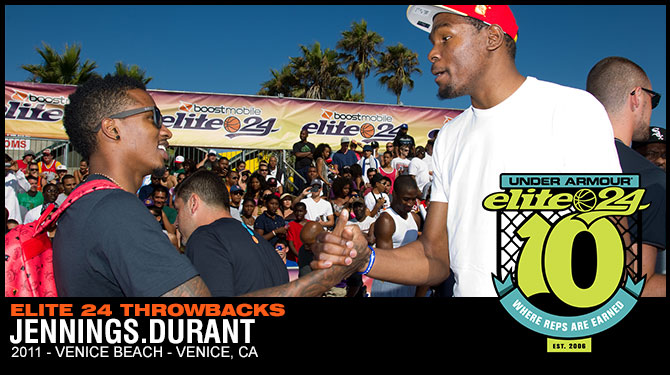 McGary’s dunk pumped Carr up and the diminutive point guard kept the crowd alive with his athletic moves and pinpoint passing. He finished with 21 points, 10 assists, seven rebounds and an event record four steals for the Raymond Lewis squad, but it wasn’t enough as the Marques Johnson squad used an 18-6 run to open the second half to propel its 142-132 victory.

2012
The first year with Under Armour as the title sponsor of the event turned out to be the final game played on the Venice Beach boardwalk and once again their was star power.

Whereas the previous year when the biggest star was on the sidelines (Jamie Foxx), the biggest star in this game was one the court. Actually, there was two big stars and they both happened to be on the Raymond Lewis Squad. In a preview of things to come, in the lobby of the host hotel one of the players on the Marques Johnson Squad said to nobody in particular, “They have Aaron and Julius?”

He was speaking, of course, about forwards Aaron Gordon of Mitty (San Jose Calif.) and Julius Randle of Prestonwood Christian Academy (Plano, Texas), as the powerful duo was too much to handle inside for the Marques Johnson club. Gordon and Randle combined for 52 points in Ray Lew’s 164-138 victory and between the two there was only seven missed shots from the field.

Randle (27 points) made 13-of-14 shots from the field, while Gordon converted 12-of-18 and also grabbed seven rebounds. Most of the shots were from close range, including Gordon’s pass off the backboard to himself that brought the house down and left little doubt as to which team would leave the boardwalk with the win.

Trailing 75-65 at halftime, the Marques Johnson Squad kept things close behind the play of forward Justise Winslow of St. John’s (Houston) and wing Jabari Bird of Salesian (Richmond, Calif.). Bird finished with 20 points while Winslow made 10-of-11 shots from the field and scored a team-high 21 points.

Along with Gordon and Randle (who also won the Under Armour Slam Dunk contest), Winslow earned one of the four game MVP awards along with another Texas player, guard Aaron Harrison of Travis (Richmond, Texas). He made 11-of-14 shots en route to 25 points and, as you can guess, he also played for the Ray Lew club.

Former Elite 24 game MVP Brandon Jennings coached the Raymond Lewis Squad while 2012 NBA Rookie of the Year Kyrie Irving coached Marques Johnson. Will Barton, DeAndre Jordan and Derrick Williams assisted Irving, but they probably needed to play for Irving for his club to have a realistic shot at winning.