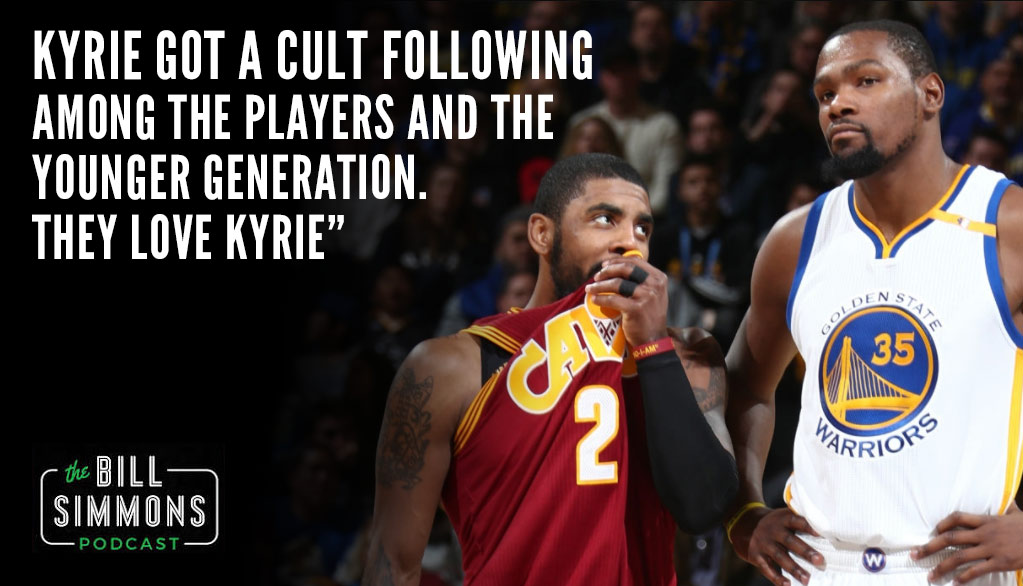 During Kevin Durant’s last appearance on Bill Simmons’ podcast for The Ringer, the “social media MVP” raved about Kyrie Irving and pissed off the cult of Bubba Chuck by saying, “Kyrie is better than AI to me.”

In his latest appearance, KD talks about the backlash from the misunderstood personal opinion of his and continued to show his love for everyone’s favorite Uncle while discussing the Cavs and Celtics trade.

I heard Richard Jefferson say something that was really, really interesting. What he said was [that] Kyrie is just a pure basketball player. He crafted his skill since he was like 8, 9 years old. You can just tell, the way he plays, nobody plays like him. So he’s a pure basketball player. He probably played playground ball, his pops probably took him to the roughest neighborhoods and threw him out there on the basketball court, told him to just go play. So he built up the love for the game.

When you’re around LeBron James, there’s so much that comes with that. Outside distractions and conversations and just noise that just comes around just from being around LeBron James. And Kyrie was at the point, like, “All right, we lost the championship, this whole season’s gonna be about if LeBron’s gonna leave or not. I’m ready for a new challenge.” All that stuff kind of met at the pinnacle of why he wanted to leave, and it just felt like he wanted a situation where he would just be free from all of that and just play.

It’s a perfect system for him in Boston; it’s a perfect fit. Because he’s a 6-foot-3 Isaiah Thomas, basically, and Isaiah just thrived in that system, and then he got Gordon Hayward and Al Horford, who are gonna be able to make plays for him, too. It’s gonna be pretty sweet. I think it was a great deal. But I just think Kyrie just wanted a place where he can focus on just playing basketball and not worrying about the other drama that comes with.

Kyrie got really a cult following among the players, and the younger generation. They love Kyrie.

Durant also had some amusing things to say when asked about loyalty in the NBA and if everybody knows it doesn’t exist.

Those relationships that you have with trainers and teammates and anybody in the organization, that’s loyalty. That’s friendship. That’s relationship. That’s something that’s gonna last forever. But when it comes to numbers on a paper, at the end of the day, that trumps everything. “Does this dude fit into our salary cap or into our plans? Nah, let’s see what we can get for him.” Like, that’s just a part of the game.

I hope she was aware of it. It is strange now because it made me look crazy, but now it made me look real cool because I would. I actually love Scarlett Johansson, and I would do that. And she’s single now from what I heard.