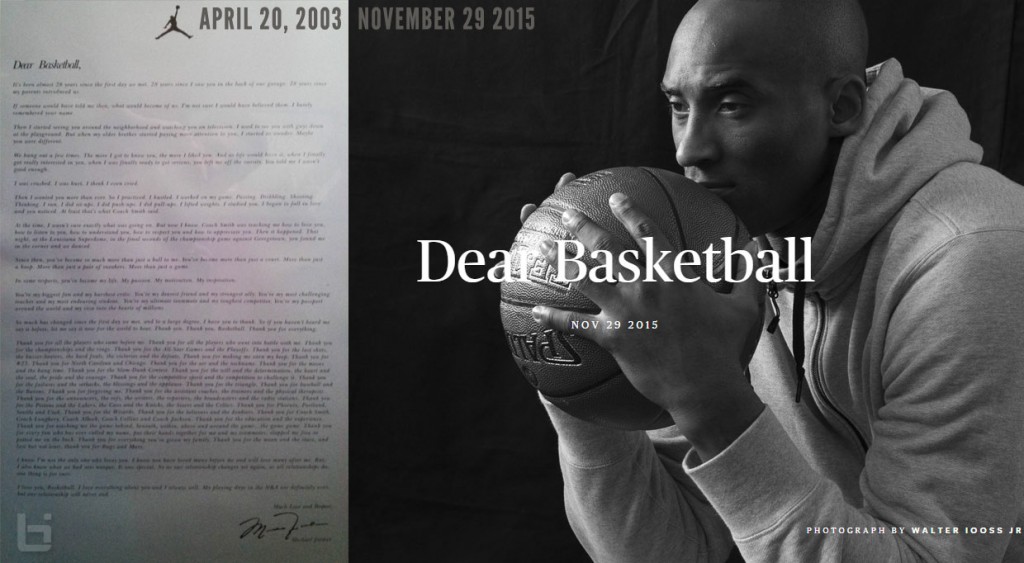 We all know Kobe Bryant wanted to be like Mike. The only difference between him and 99.9% of the people who picked up a basketball and drank Gatorade is Kobe actually became Mike. Well, at least “this generations Michael Jordan” as Jamal Crawford once said.

And like Mike, Kobe set records, won scoring titles and championships and even announced his upcoming retirement in a similar way.

On November 29th of 2015, Kobe Bryant wrote a letter called “Dear Basketball” with the announcement.

On April 20th of 2003, Nike took out a full page ad in a bunch of Sunday newspapers to publish Michael Jordan’s retirement letter titled “Dear Basketball”

You can read both of the letters and then enjoy some great videos showcasing just how similar the two legends are.

From the moment
I started rolling my dad’s tube socks
And shooting imaginary
Game-winning shots
In the Great Western Forum
I knew one thing was real:

I fell in love with you.

As a six-year-old boy
Deeply in love with you
I never saw the end of the tunnel.
I only saw myself
Running out of one.

And so I ran.
I ran up and down every court
After every loose ball for you.
You asked for my hustle
I gave you my heart
Because it came with so much more.

I played through the sweat and hurt
Not because challenge called me
But because YOU called me.
I did everything for YOU
Because that’s what you do
When someone makes you feel as
Alive as you’ve made me feel.

You gave a six-year-old boy his Laker dream
And I’ll always love you for it.
But I can’t love you obsessively for much longer.
This season is all I have left to give.
My heart can take the pounding
My mind can handle the grind
But my body knows it’s time to say goodbye.

And that’s OK.
I’m ready to let you go.
I want you to know now
So we both can savor every moment we have left together.
The good and the bad.
We have given each other
All that we have.

If someone would have told me then, what would become of us, I’m not sure I would have believed them. I barely remembered your name.

Then I started seeing you around the neighborhood and watching you on television. I used to see you with guys down at the playground. But when my older brother started paying more attention to you, I started to wonder. Maybe you were different.

We hung out a few times. The more I got to know you, the more I liked you. And as life would have it, when I finally got really interested in you, when I was finally ready to get serious, you left me off the varsity. You told me I wasn’t good enough.

I was crushed. I was hurt. I think I even cried.

Then I wanted you more than ever. So I practiced. I hustled. I worked

on my game. Passing. Dribbling. Shooting. Thinking. I ran. I did sit-ups. I did push-ups. I did pull-ups. I lifted weights. I studied you. I began to fall in love and you noticed. At least that’s what Coach Smith said.

At the time, I wasn’t sure exactly what was going on. But now I know. Coach Smith was teaching me how to love you, how to listen to you, how to understand you, how to respect you and how to appreciate you. Then it happened. That night, at the Louisiana Superdome in the final seconds of the championship game against Georgetown, you found me in the corner and we danced.

In some respects, you’ve become my life. My passion. My motivation. My inspiration.

You’ve my biggest fan and my harshest critic. You’re my dearest friend and my strongest ally. You’re my most challenging teacher and my most endearing student. You’re my ultimate teammate and my toughest competitor. You’re my passport around the world and my visa into the hearts of millions.

So much has changed since the first day we met, and to a large degree, I have you to thank. So if you haven’t heard me say it before, let me say it now for the world to hear. Thank you. Thank you, Basketball.

Thank you for everything.

I know I’m not the only one who loves you. I know you have loved many before me and will love many after me. But, I also know what we had was unique. It was special. So as our relationship changes yet again, as all relationships do, one thing is for sure.

I love you, Basketball. I love everything about you and I always will. My playing days in the NBA are definitely over, but our relationship will never end.

Much Love and Respect,
Michael Jordan