Earlier in the week, Bucks coach said Jason Kidd said comparisons between him and Lonzo Ball is “a stretch” (even though their numbers after 11 games in the NBA were almost identical). On Saturday, against Kidd’s Bucks, the just turned 20-year old Ball replaced LeBron James as the youngest player in NBA history with a triple-double by racking up 19 points, 11 boards, 13 assists, 4 blocks and 3 steals. He also shot a career-best .583 (7-12) from the floor and .600 (3-5) from three.

“That’s going to be, I guess, the headline, that he got a triple-double and I got to see it in the front row,” said a correct Kidd after his Bucks beat Lonzo’s Lakers 98-90. “Ball can play, and he is going to make his teammates and team better. Triple-double, that is going to be the norm for him. He is going to fill up the stat sheets.”

The other headline is going to be how the just turned 20-year old Ball couldn’t care less about putting up a triple-double in front of Kidd or replacing LeBron James as the youngest player (by 5 days) in NBA history.

“I really don’t care,” Said Ball, after the accomplishment. “I just wanted to win tonight. I thought we put ourselves in a good position to get it, but it didn’t happen.”

While talking to The Vertical, after saying he “really doesn’t give a …” he also gave credit to his Dad for his approach to the game and being able to block out the “noise.”

“In today’s NBA, a lot of point guards get buckets, but I go off my impact and what I can do to win games. It’s not going to be scoring every night, but I’m trying to improve that. The way I play, it comes from Dad. He really don’t care about noise either. My dad had me on lesser teams, so I had to do more and it prepares me.”

Triple-double King and Lakers team president Magic Johnson also had some praise for Ball after the loss. 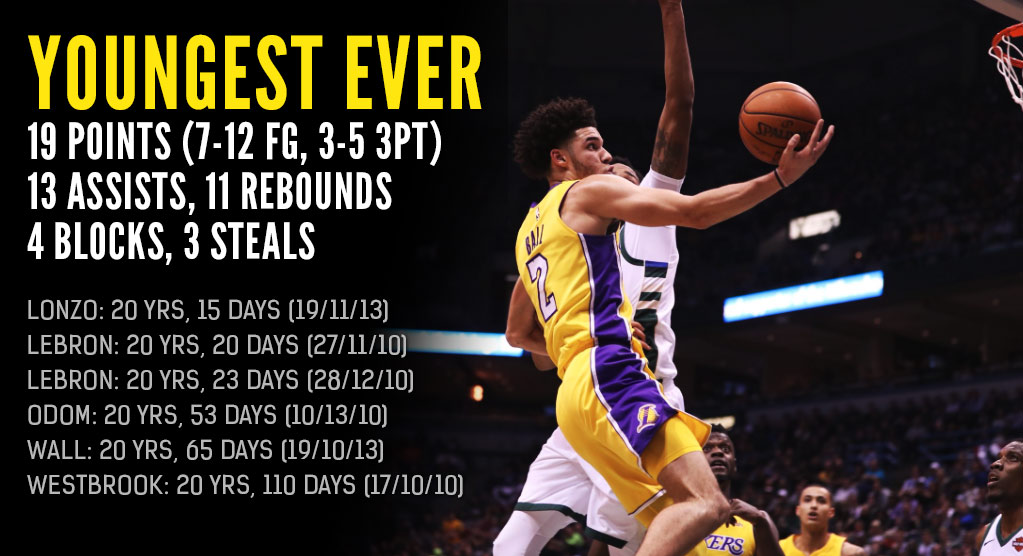