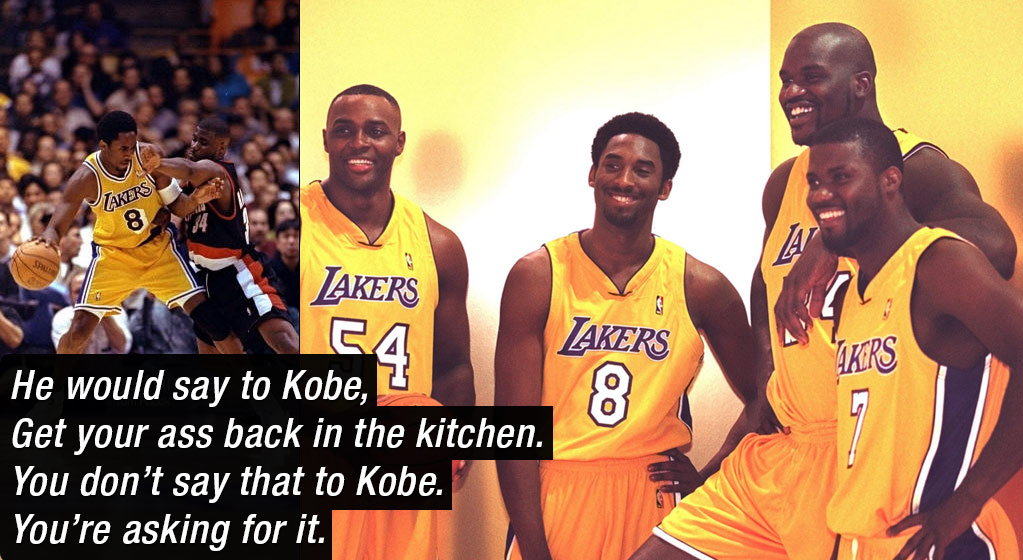 In the recent must-read article “How We’ll Remember Kobe Bryant” on The Players’ Tribune, four of Kobe’s former teammates — Horace Grant, Ron Harper, Brian Shaw and Devean George — shared some of their favorite memories from playing alongside Bryant during the 2000 Lakers Dynasty. The most memorable one by far came at the expense of another teammate, the one and only Isaiah “J.R.” Rider.

Before we get into the story about a young frobe “destroying” the inventor of the East Bay Funk Dunk, let me give you a little background story. I’ve had the pleasure of knowing Rider over the past four or so years and have conducted a few interviews with him, including a 90-minute tell-all one a few months ago. During that interview, which hasn’t been released yet, he had a lot of positive things to say about Kobe, talked about going at him in practices and how he used to “get buckets” against him during the late 90s, when Rider was rolling with the Jailblazers and the Lakers were getting swept every year in the playoffs. He also said going to LA was the “death of his career.

According to Rider, Phil Jackson and Shaq convinced him to come to LA instead of joining the Miami Heat for more money. At first, it seemed like a good decision but it wasn’t long until Rider — a starter his entire career – went from 6th man to last guy off the bench. After an “incident” in practice, Jackson was done with him and left him off the playoff roster. His biggest contribution to basketball during that championship run was appearing in the iconic photo of Iverson stepping over Tyronn Lue.

Horace Grant
J.R. was brash. He was an Oakland guy. Oakland guys are a different breed. He had this swagger about him. Kobe was just coming off winning the championship in 2000. We traded for J.R., and he wasn’t a threat to Kobe’s position or anything, but it didn’t matter.

J.R. would shit-talk Kobe. Every practice, it was MF this, MF that. He would say to Kobe, “Get your ass back in the kitchen.”

You don’t say that to Kobe. You’re asking for it.

We knew Kobe was going to wear him down. Once Kobe found his weakness, he was going to let him have it. Then one day, I guess he found it …

Brian Shaw
So one day in practice, J.R. says to Kobe, “Don’t get it twisted. I’m a star too, and I used to give you buckets.”

So Kobe says, “Man, you really think you could take me? Alright, after practice, me and you. One-on-one.”

Ron Harper
Phil Jackson loved this stuff. He didn’t even wait for practice to end. He says, “Alright, you want to go? Everybody off the court.”

I’m a vet at this point. You don’t have to tell me twice. Get me a Gatorade and an ice pack and some popcorn. I pulled up a chair and waited for the show to start.

Brian Shaw
They played to 10 by ones. Kobe just absolutely demolished him.

This is 22-year-old Kobe. Crazy athletic. Unlimited stamina. I mean, he kicked his ass. He pulled out everything in his bag — dunk, up-and-under, pull-up, crossover.

We were on the sidelines gassing it up. People are laughing, yelling, “Hey J.R., be careful what you wish for.”

Devean George
When Kobe finished him off, it was almost like, Man, why did you have to do him like that?

Horace Grant
It got to a point where J.R. basically said, No más. No más.

J.R. had his tail between his legs for the first time in his life.

J.R. wanted to fight everybody in the gym.

BONUS: RIDER VS THE LAKERS IN 98