If you think sharing coaching duties with LeBron or trying to figure out if JR Smith should be starting over Dwyane Wade is a challenge, then you have never been thirsty and faced with a frozen water bottle that may or may not have enough melted ice in it to make a drink attempt worthwhile. Coach Tyronn Lue was faced with this challenge this past weekend while trying to listen to a question about threes and erasing deficits.

I’m a Lue believer. I have faith in him like he had faith in that bottle. The reason why is because I was a Laker fanatic during his days in La La Land and I saw and heard everything he went through. Forget the Iverson step-over in the Finals, I remember hearing about a young Frobe Bryant wanting to fight Lue in practice because the six-footer blocked one of his dunks.

I also remember hearing Shaq say Lue wasn’t allowed to talk to him.

I’m 99.9% sure Shaq was just joking around. Just like he was in the following photos of him joking around and flipping through his CD collection with durag-wearing Lue on a team plane. 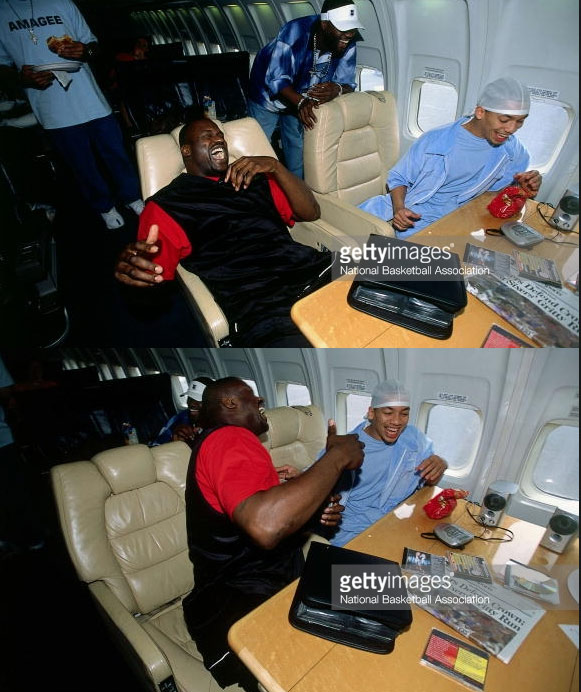 Lue’s real punishment came when he decided to leave the Lakers before the three-peat was completed to go to Washington. After spending some time with Michael Jordan on the Wizards, he ended up with the Orlando Magic — worst team in the NBA in 2003/04. After riding the bench in H-Town, he ended up in Atlanta, where the team not only had the worst record in the league but the worst record in franchise history: 13-69.

He bounced around a few other cities as a player and coach and eventually landed in Cleveland, where he finally got that third championship and is faced with challenges such as juggling superstars, trying to figure out how to beat the Warriors and what do you to when someone puts a frozen water bottle in front of you at a postgame conference.

If you also remember his days as a Laker and love intentionally bad jokes by Jordan’s main man Ahmad Rashad, then check out this feature from the best 90’s Saturday morning show ever…besides the original ‘YO! MTV RAPS.’