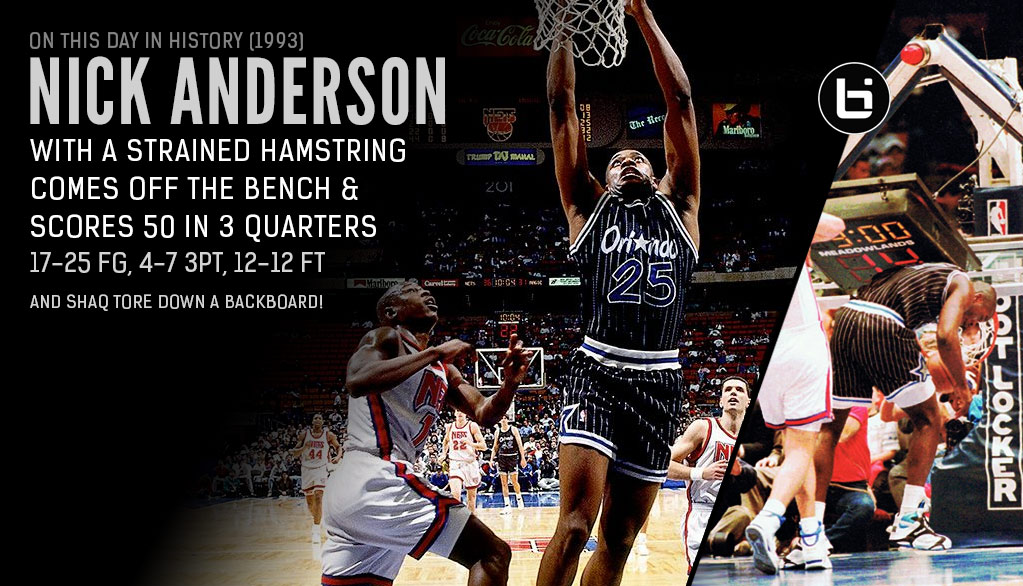 When people discuss “surprising players” in the 50-point club, they usually bring up names like Willie Burton, Tony Delk, Dana Barros, Tracy Murray and most recently Terrence Ross and Corey Brewer. They rarely mention Nick Anderson, but the former Orlando Magic player has one of the oddest and most unique 50-point games in NBA history.

For starters, Nick didn’t even start the game because of a strained hamstring that had him questionable right before tip-off.

“Lenny (Currer) said that Nick couldn’t go, but he was still dressing,” Coach Matt Guokas said. “I’m happy he did.”

Who wasn’t so happy about seeing Nick and the visiting Orlando Magic were the New Jersey Nets’ arena workers, who had to spend over 30 minutes fixing a backboard that Shaq — still angry about getting dunked on by Derrick Coleman in their first meeting — pulled down in the first quarter. Unlike the clean backboard break in Phoenix a couple of months earlier, this one was loud, nasty and scary. Worth noting, is some actually believe it was staged because it was the final game of the season for the Orlando Magic (a team not advancing to the NBA playoffs) and Shaq, who just had one of the best and most marketable rookie campaigns of all-time.

Once the game was able to proceed, Nick came off the bench and made his first shot. Then another and another and then after just 33 minutes, Nick had a career-high 50 points on 17-of-25 shooting from the field and a perfect 12-for-12 from the line — a place that became a nightmare for Nick in his post 1995 Finals years.

“It kind of even shocked myself,” said Anderson. “I was in a zone. They were all going in and everybody was giving me the ball.”

Usually, after a game when a player scores 50, you will find reporters lined up to speak to that player. Not on this night. The media were lined up to talk to his rookie teammate Shaq, who ended the night with just 10 points and 5 rebounds…but did tear down a backboard, which is something you just don’t see that often in an NBA game. FYI, the NBA created “Shaq proof” rims between this season and Shaq’s sophomore campaign.

Nick’s 50-point masterpiece just might be the quietest 50 in NBA history while Shaq’s 10 turned out to be one of the loudest.

But Shaq did make some worthy noise vs the Nets during the following season when he racked up an insane 24 points, 28 rebound and 15 blocks in a single game!

“I guess I played O.K,” said O’Neal after the triple-double. 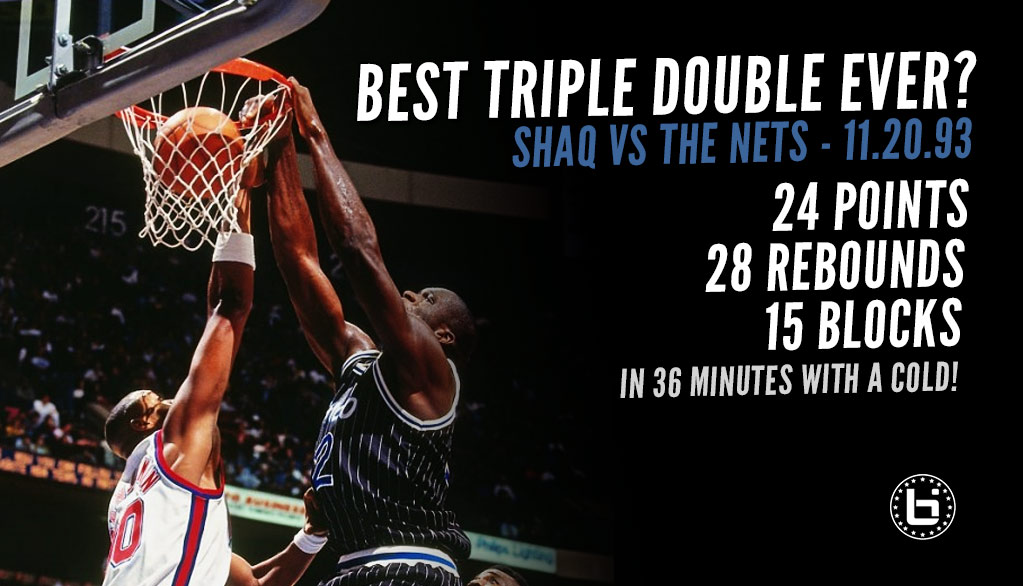 Shaq, born in Newark, New Jersey, always had a history of memorable games and moments against the Nets. During his first meeting with the Nets, he scored 29 but the memorable moment came courtesy of Derrick Coleman, who scored 30 and threw down the only “poster dunk” on Shaq during his career. After the game, Shaq vowed to never get posterized again and to make the Nets pay.

And he did make them pay. Shaq’s next visit to New Jersey resulted in a broken backboard — the 2nd of Shaq’s rookie season.

Then the next time Shaq came back to his hometown, he put up the monster triple-double (24/28/15)! As for Derrick Coleman, who dunked on Shaq the year before, he came down on his right ankle in the 3rd quarter and left the game with a season-low 8 points and 8 boards. If that wasn’t enough to frustrate the late great Coach Chuck Daly, who’s been watching his Nets players go down like flies over the past few games, he thought the officials were padding Shaq’s stats.

“We did a decent job on (Shaq). I think it’s very hard on the officials because some of the things he does, a lot of his blocks are close to being goaltending.” said Daly after the loss.

That might be true but Shaq’s 3 blocks on Armon Gilliam in the 4th were clean.

Shaq’s dominance over the Nets didn’t end in Orlando. In 1998, Shaq scored 50 on the franchise and in 2002, Shaq helped the Lakers sweep the Nets in the NBA Finals.