Back in April, 7’5 Sim Bhullar became the first player of Indian descent to play in a NBA game. In the very near future, 7’2″ 290-pound 19-year-old Satnam Signh Bhamara is hoping to become the first player born in India to make a NBA team.  It is a long shot since most mock drafts don’t even have him in the top 100 but with his size, some team will probably eventually give a him a chance.

“I do think he’ll end up in the NBA because I’ve seen his progress over the last four years,” said IMG Director of Basketball Kenny Natt via SI. “I’ve been in the league and know how guys like Satnam are looked upon. He has size, strength and touch. He has good hands and can run the floor. Those are the types of things that NBA teams value.”

Bhamara comes from a small village of 800 but if he makes the league, it could help with the popularity of basketball in a country where only 5 million out of 1.2 billion hoop.

“The whole country of India is counting on him,” Natt said. “He knows this is his opportunity and he’s handling it. He knows that it’s show time.” 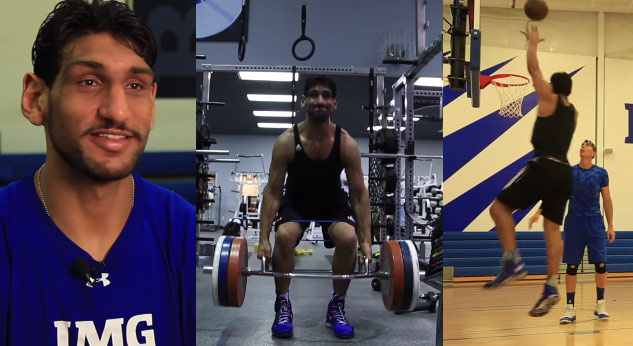