“I don’t care if I get fined,” Barkley said before his fine was announced for getting into a fight with Bad Boy Bill Laimbeer in 1990. “I make $3 million. What’s a couple of thousand dollars?”

Well, that couple of thousand turned into an NBA record $20,000 fine which also came with a one-game suspension. Laimbeer received the same punishment as the league handed out a league record $162,500 in penalties for the original “Malice at the Palace” that took place 14 years before Ron Artest and Ben Wallace started the infamous Pacers/Pistons brawl.

So who started this fight between the 76ers and Pistons? Bill Laimbeer of course. Just minutes after Isaiah Thomas was ejected for throwing a punch at an amused Rick Mahorn, Bill Laimbeer shoved a ball into the face of his former teammate after Mahorn made an and-1 dunk on Dennis Rodman with 15 seconds left in the game. Barkley, who has been ejected a league-high 5 times and was second to only Mahorn in technicals, came over and threw some punches at Laimbeer’s face. Then it was chaos as the benches cleared.

“Barkley hit me first,” said Laimbeer. “It has been building for the whole season. My intent wasn’t to start anything. When it happens, you don’t think, you just react. It happens in sports . . . I think they have big mouths and they have a bigger media market, and they have to pump themselves up. I don’t think they can play with us.”

As expected, the always amusing Barkley was full of great quotes after the game.

“I won two titles tonight,” Barkley said. “I won the division title with my teammates, and I retained my undisputed heavyweight championship of the world.”

According to Barkley, he almost got into another fight after his ejection.

“When I tried to leave, a fan punched me, and I spit in his face. I was just trying to leave. It was ridiculous.”

Almost as ridiculous as Laimbeer telling him, “I’m going to get you next time.”

When it was all said and done, these were the fines for each player.

Although the fine was heavier than he expected, Barkley didn’t care about missing the season finale against the Celtics.

“I’ll be sitting there in a thousand-dollar suit.”

A year later the two reunited and had a rematch in the comedy ‘Hot Shots.’ 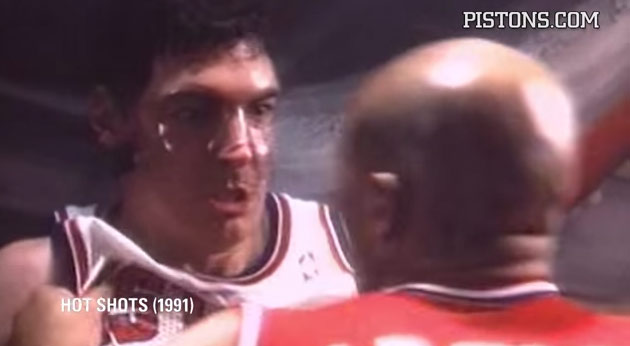