Antonio McDyess had no intentions of playing basketball again after last season, but the Spurs weren’t willing to give up on him, until yesterday, when they finally waived him. He then made his retirement official.

I had the pleasure of hanging out with Dice a couple of times since my initial meeting with him at a Houston party in 2009. He’s as vocal off the court as he his on the court (which means he’s quiet) but he’s also one of the nicest and most humble NBA players I’ve ever met and I’m not saying that because I’ve been a fan since the day he entered the league.

Like most people, I never heard of Dice until March Madness, where he went from that guy that dunks a lot for Alabama to unstoppable force that made his draft stock rise so much, he was drafted 2nd in one of the deepest classes of the 90s: Jerry Stackhouse, KG, Rasheed Wallace, ROY Damon Stoudemire, #1 pick Joe Smith. He was then shipped from the awful Clippers to Denver in a Draft Day trade for Rodney Rogers and a pick which became Brent Barry.

It only took a few preseason games for Dice to establish himself as a rising star and have people calling him Shawn Kemp with a better jumper (FYI: Kemp had an underrated jumper). In 1999, he made the All-NBA 3rd team. A year later, he won Gold in the Olympics (he also had a game-winner during those games). Then in 2001, the 20 & 12 Nugget finally made the All-Star team and I was thinking Dice was finally going to be recognized as a star in the league. 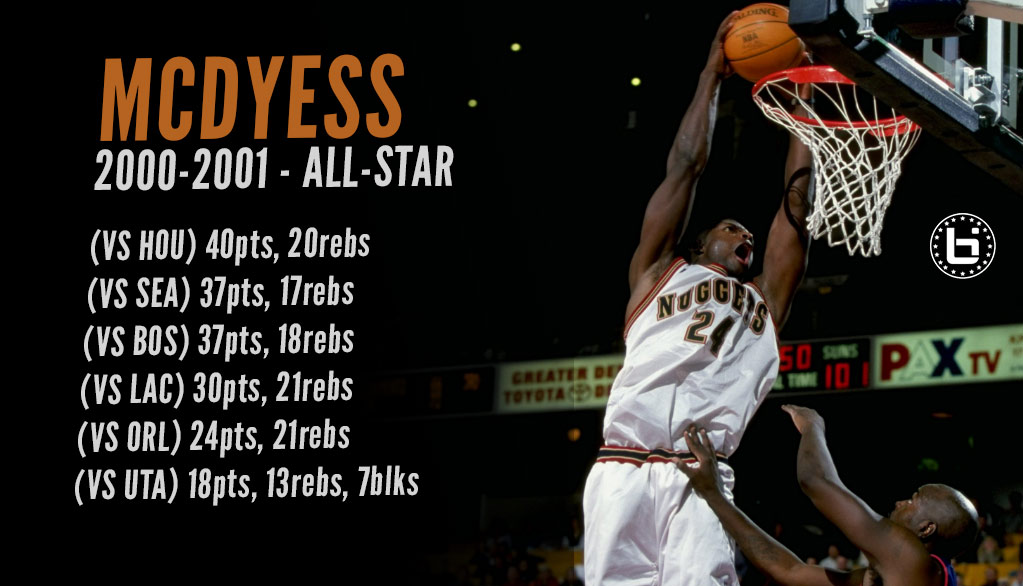 Then just 10 games into the next season, he suffered a Patella Tendon rupture, costing him two more seasons which should have been All-Star ones.

His next stop was in New York, where he re-injured his knee again — on a rebound dunk. He would go on to have a short stint (even shorter than his first time) with the Suns and then found a home in Detroit, where he often showed flashes of the brilliance he was robbed of due to his knee injuries.

In his final season in the NBA, as a member of a non-championship-winning Spurs team, he also showed flashes of the double-double player I couldn’t wait to draft on my 90s fantasy basketball teams. But those flashes weren’t enough to make him want to finish out his contract in San Antonio.

He’s living in Houston now and lucky for me, I occasionally get to bump into him. And every time I walk away from a chat with him, I think to myself, “He’s as nice off the court as he was just plain nasty on the court.”