After winning the Naismith and Wooden College Player of the Year awards and even having a sandwich named after him at the Chapel Hill Four Corners restaurant (crab salad on a pita?),  Michael Jordan decided to skip his senior year at UNC to enter the 1984 NBA Draft, along with teammate Sam Perkins. The 84 Draft would become infamous for a historic “blunder,” but that “blunder” is arguably one of the biggest misconceptions in sports.

Looking back, the two common questions people ask are, “Why did two teams pass up on Jordan?” and “Why was Sam Bowie picked before him?”

Truth is, it made perfect sense for Houston and Portland to pass on him and the Chicago Bulls only drafted Jordan because they couldn’t get a big man.

The Rockets had the first pick and they had no second doubts about drafting Akeem before the H was added. The Blazers had the second pick and unlike most bad teams that needed a big man to win games, they were a winning team that needed a big man to win a championship and Sam Bowie was clearly the most talented big man available: He was the American version of Sabonis, but the red flag on him was his broken leg and if it could hold up in the NBA. The Blazers did run tests on Bowie and his legs and in a 2012 documentary called “Going Big,” Sam Bowie admitted to lying to the Blazers about the pain in his knee. I’m sure if they would have known that Bowie’s tibia was still hurting him they would have reconsidered. But also consider the Blazers had All-Star Jim Paxson and Clyde Drexler, who was clearly a star in the making, so it didn’t make much sense to draft a player like Jordan who was arguably no better at the time than the existing player playing the same position on a team.

“We haven’t made a decision, but it is likely we will take someone else,” Portland Coach Jack Ramsay said of Jordan before the draft. “That isn’t to say that we don’t like Michael Jordan. You won’t find anybody saying that; it’s just that we more desperately need a center.”

The 3rd pick belonged to the Bulls and this is where the biggest “blunder” in draft history was almost made. The Bulls only selected Jordan because the top two big men were gone and they were unable to trade the pick that would be Jordan for centers Jack Sikma or Tree Rollins. Jack Sikma (If you don’t know who the very underrated center is, then watch this hilarious Inside The NBA prank video of Shaq finding out Sikma was a “better center” than him)!? There was even a 3-way trade involving the Bulls’ pick going to the LA Clippers for Terry Cummings, which fell through a week before the draft. And if that wasn’t crazy enough, some writers even predicted big man Mel Turpin of Kentucky going 3rd and MJ landing in Dallas! Now try explaining those blunders to historians as Michael Jordan becomes the best Maverick and player ever. 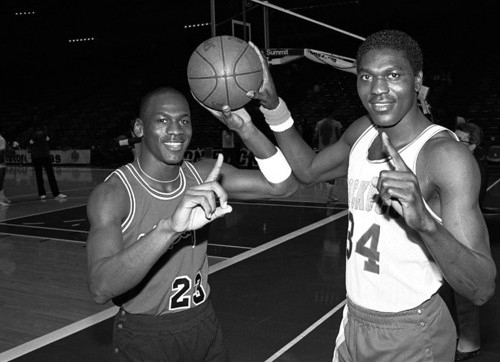 Now there was also a very interesting trade rumored around that time which is my favorite all-time “What If?” trade. No, not Jordan going to the 76ers for Dr. J or a package with the great Andrew Toney, Clemon Johnson and the 5th pick (which became Charles Barkley), although those are on my honorable mentions list. According to Hakeem in his biography, the Blazers offered the Rockets the #2 pick and Drexler for Ralph Sampson. The Rockets declined and the birth of the “Twin Towers” happened, but what if the Rockets would have accepted the trade and for some reason taken Jordan with that pick? Hakeem, Clyde Drexler and Michael Jordan on the same team! I’m not sure Air and Glide would have been able to co-exist back then but I’m sure it would have been pretty exciting to watch them try.

In early 2016, I had the honor of interviewing Hakeem and I asked him about this trade. He smiled, downplayed it and just said, “What if? What if?”

What combo eventually did happen with great results is the combo of Michael Jordan and Scottie Pippen in Chicago. So yeah, I don’t think the Bulls have any regrets about what they ended up with on June 19th of 1984.