The odds are, if you like basketball and you are old enough to remember VHS tapes and the great joy of visiting a Blockbuster video on a Friday night, then you have probably seen Michael Jordan’s COME FLY WITH ME at least 50 times. I’m not saying to have seen and enjoyed the first great NBA tape you had to be from the analog generation or know the pain of going to Blockbuster to find out the only copy of ROBOCOP is still out, but, the odds are, the older you are, the more you will appreciate and/or remember some of these things I’m reminiscing about.

The story starts during the third quarter of a special preseason game (The Hall of Fame game) in 1987 between the Chicago Bulls and Los Angeles Lakers. Starving for a dunk, Jordan finally gave the fans in attendance one of his trademark tomahawk dunks. Little did they know, they witnessed what would become one of the most memorable images in NBA history.

One of the photographers at this game was the great Andrew D. Bernstein, who had access to a camera behind the backboard. With that unique angle, he snapped the following photo of Jordan throwing down two of his 36 points in front of a trailing Michael Cooper (who would later end up on another Jordan posterization poster) and Jeff Lamp. 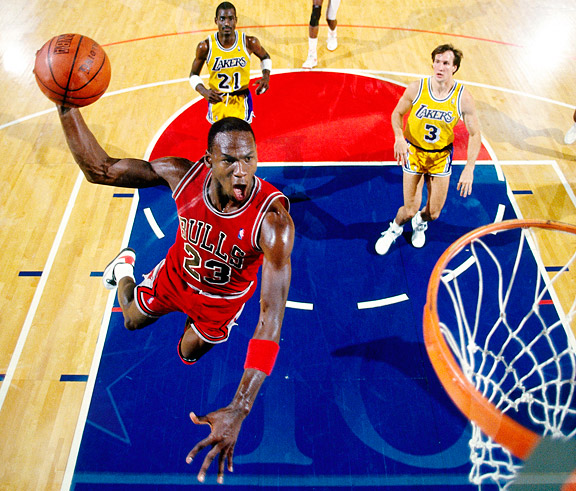 A year later, CBS and Fox video used Bernstein’s photo for a promo card that was randomly inserted into VHS tapes they were distributing. On the front, it said ‘Michael Jordan: Come Fly With Me’ below the CBS/Fox Video Sports logo, so VCR owners knew they were finally going to have a chance to be able to watch, rewind and rewatch Jordan’s greatest highlights again and again (until the tape pops) at home. On the back of the promo, was an offer to get a limited edition Jordan T-Shirt for just $7.95 (and 2.95 shipping).

The shirts are tough to find but you will occasionally come across one for a hundred or less dollars. The promo card has become a more sought-after piece of memorabilia, often fetching between $300-500. 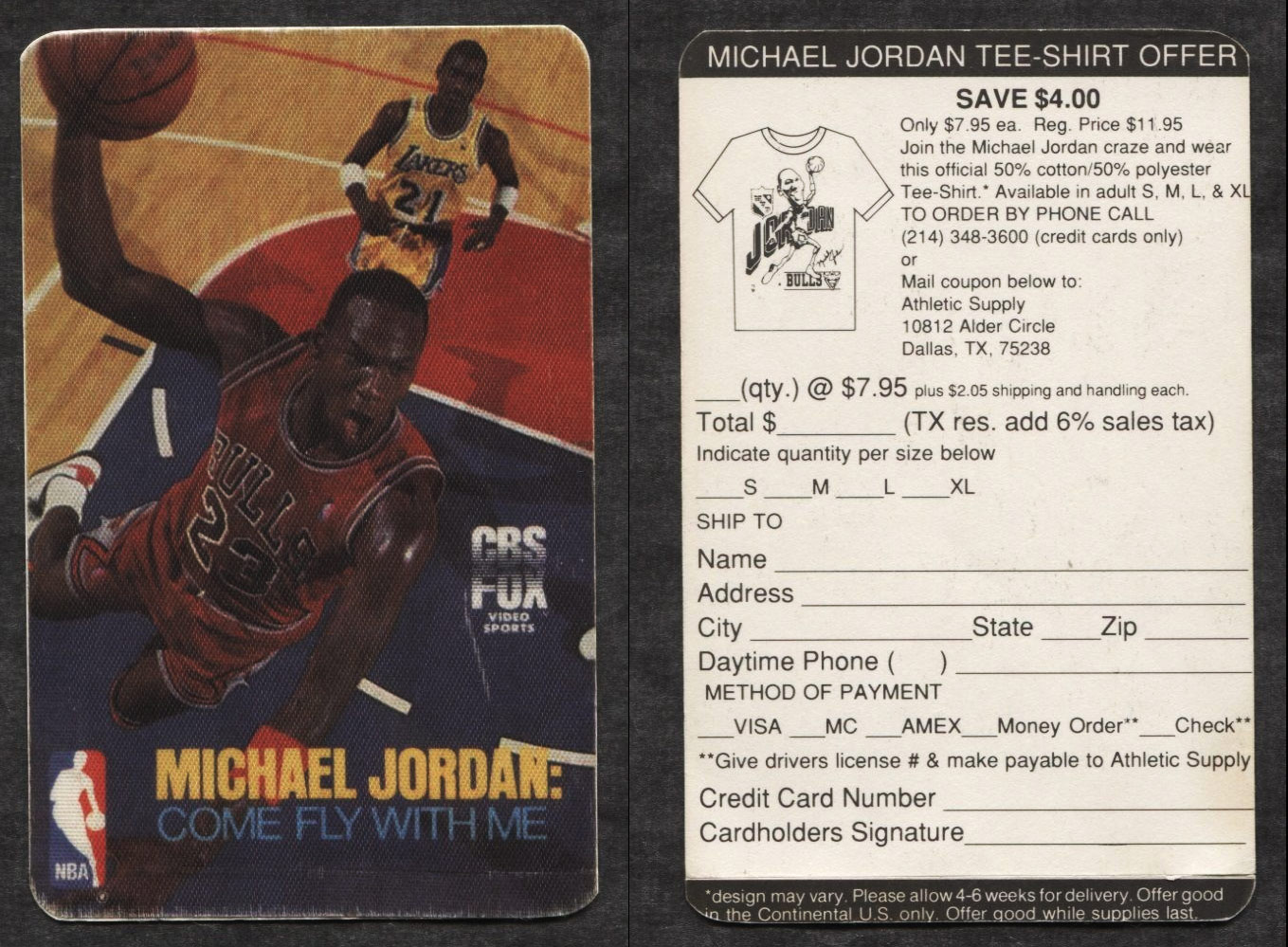 On January 26th of 1989 — five days after Jordan dropped 53 points (20/28 FG), 14 rebounds and 8 rebounds on the Phoenix Suns — CBS/Fox dropped COME FLY WITH ME into the home video market and rental stores like Blockbuster. The 42-minute masterpiece was directed by David Gavant — mostly known for making baseball specials and documentaries after COME FLY WITH ME — and narrated by Jay Thomas, who recently passed away and was mostly known for the TV show MORK & MINDY before 1989 and shows like CHEERS and MURPHY BROWN afterward. The soundtrack featured 80s staples like Yanni and John Tesh — mostly known to basketball fans as the creator of the NBA on NBC theme song. And of course the highlights were Michael Jordan taking flight over defenders and some candid conversations with Mike and his parents.

If you didn’t have a Blockbuster membership, there was another way of getting  your hands on the tape that went on to sell over half a million copies. All you had to do was buy a 12 pack of Coke. 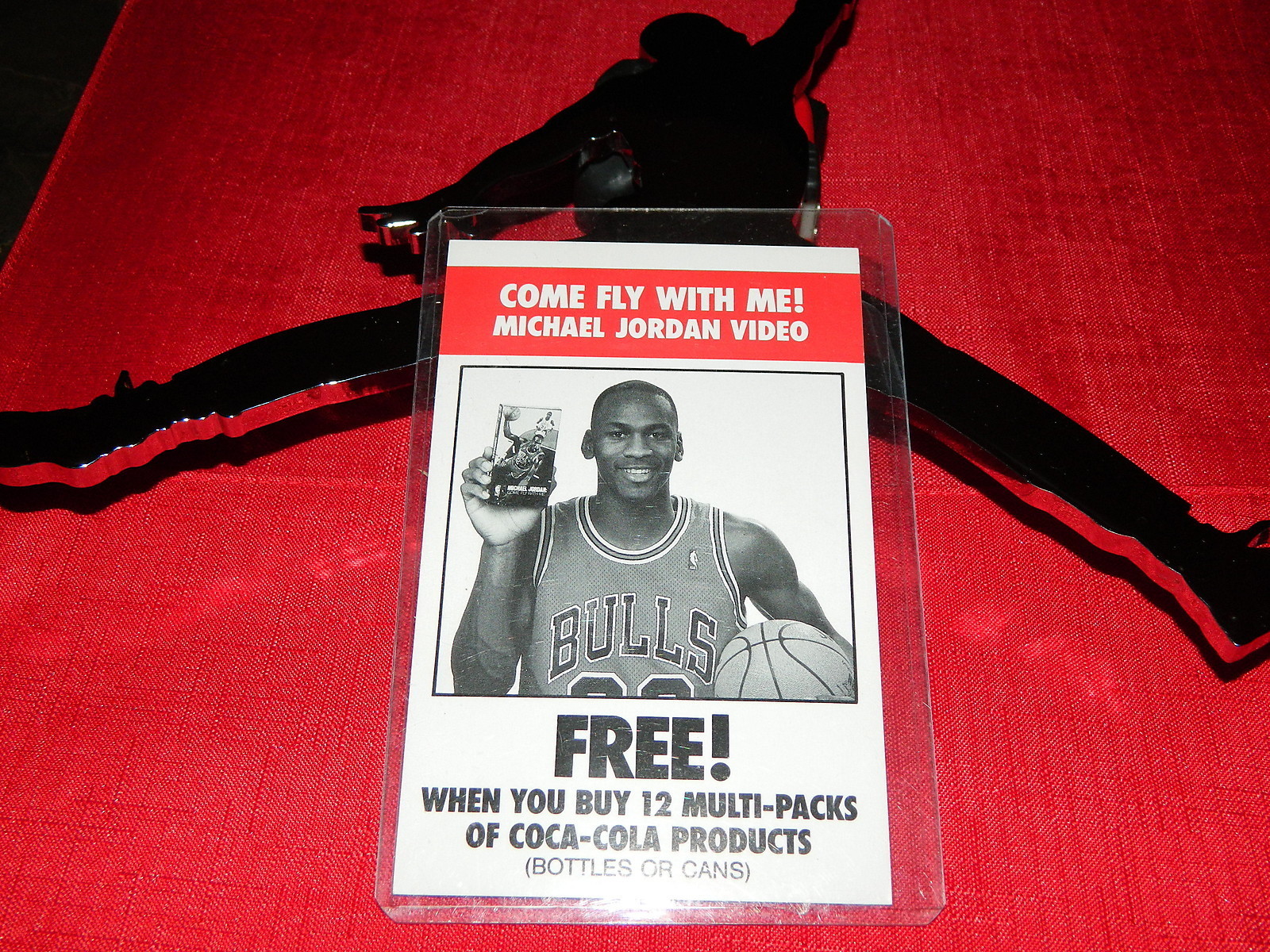 Coke? People didn’t start singing “I wanna be like Mike” until 1991. Before then, Jordan was endorsing the can full of high fructose corn syrup and sugar. Coke did have a chance to resign Jordan but his agent, David Falk, wanted a 10-year deal and Coke was reportedly only willing to give him five. Gatorade had no issues giving him ten.

A year before Jordan started endorsing Gatorade, Sports Illustrated updated COME FLY WITH ME by adding highlights of Jordan in the 1989 playoffs, changed the cover by adding “1990” under the title and replacing Bernstein’s image with a photo of Jordan dunking from the free-throw line in the 1988 NBA Dunk Contest. They then gave it away to subscribers.

In 2014, I did an interview with Michael Jordan fanatic Jamal Crawford — who claims to have seen COME FLY WITH ME 200 times — and gave him a copy of the updated SI version. You can watch the amusing moment, along with Crawford talking about the tape at the two-minute mark. You should watch the rest of the video for a bunch of other awesome stories about his relationship with Jordan.

Since the days of Blockbuster nights, believing Gatorade is healthy and playing JORDAN VS BIRD on Sega Genesis, Jordan became the GOAT and COME FLY WITH ME has been released multiple times on DVD and is often shown on NBATV. It’s still cool to see it on a 4K TV but it just doesn’t bring me the joy of watching it on a two-head VCR and seeing static come up on my 19-inch mono TV right before the best parts. If you are wondering why static was appearing, it’s because VHS tapes would generate static on parts viewers would most hit stop, forward and rewind. So if you saw static on a VHS tape, it means you are about to see something good. Just find a VHS copy of FAST TIMES AT RIDGEMONT HIGH and you will see a bunch of static appear before Phoebe Cates gets out of the pool. 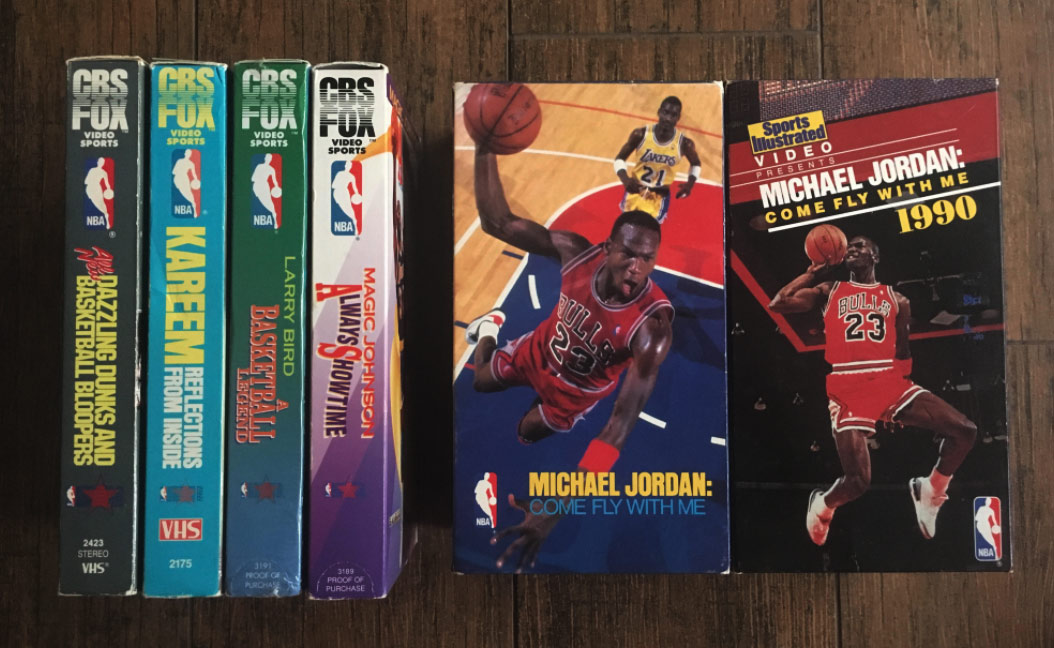 COME FLY WITH ME TRAILER

THE HALL OF FAME GAME