Minnesota and Michigan crowned state champions over the weekend and it caused movement in the latest FAB 50 National Team Rankings powered by Ballislife.com. There’s one newcomer this week as one team from Michigan was upset and fell out to make room for the team it lost to that went on to win the state title.

It’s not easy to move up in the weekly FAB 50 National Team Rankings powered by Ballislife.com, but take a loss at the wrong time and it’s plenty easy to go tumbling down.

That was the case this past week for programs looking to win state titles.

For Minnehaha Academy, its run to the state title became more of a coronation, as the Redhawks captured the Minnesota State High School League (MSHSL) Class AAA title with a dominant 80-29 victory over Alexandria (Minn.). Tennessee State-bound Hercy Miller, the son of Hip-Hop Mogul Master P (Percy Miller), almost out-scored Alexandria by himself, finishing with 24 points. His brother, freshman Mercy Miller, got the Redhawks off to a fast start with three 3-pointers in the first half and finished with 15 points in the easy win. 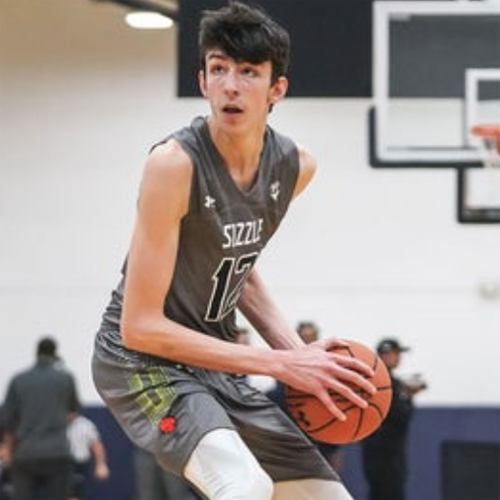 Minnehaha Academy was led all season long by leading Mr. Basketball USA candidate Chet Holmgren, the nation’s top undecided prospect who went for 18 points, 13 rebounds, seven assists and two blocked shots in his final high school game. Holmgren is a big reason why the Redhawks won three consecutive Class AA titles and four state titles in four tries. Last year’s team led by Gonzaga freshman Jalen Suggs and the big man in the middle was moved up to Class AAA, but wasn’t able to win an on-court state title because the post-season wasn’t completed as a result of COVID-19.

The Redhawks’ semifinal competition was a bit tougher, but Holmgren was the difference in a 79-58 victory over Class AAA kingpin DeLaSalle (Minneapolis, Minn.), a program that has won seven state titles since 2011-12, including six in a row from 2012-2017. Holmgren finished with 25 points and 16 rebounds. Ten players scored versus DeLaSalle, as was the case in the state final.

This Minnehaha Academy team will likely go down as the highest FAB 50 ranked team ever from the state of Minnesota. Its only loss of the season was a decisive setback at the hands of No. 3 IMG Academy (Bradenton, Fla.). Ironically last year’s team may have been better, but won’t rank as high (it finished No. 15 in the FAB 50) because it lost an in-state game to Eden Prairie (Eden Prairie, Minn.). That team was the top seed in Class AAAA before the state tourney was cancelled. While this team will likely break Eden Prairie’s record for highest FAB 50 finish by a Minnesota club (No. 12), the comparisons and contrasts between the above-mentioned clubs shows just how different each season is from a rankings standpoint.

Minnehaha Academy had a recent track record and played enough quality out-of-state foes in recent seasons to withstand losses and maintain a lofty ranking. That wasn’t the case for the team at St. Mary Prep (Orchard Lake, Mich.). The Eaglets entered the Michigan High School Athletic Association (MHSAA) D1 quarterfinals ranked No. 16 in FAB 50. It all came crashing down, however, when St. Mary Prep was upset, 58-53, in its quarterfinal contest by Grand Blanc (Grand Blanc, Mich.), a team it had defeated earlier in the season.

Grand Blanc then went on to defeat Forest Hills Northern (Grand Rapids, Mich.), 68-58, in Thursday’s semifinal contest before taking on unbeaten and FAB 50 No. 44 Huron (Ann Arbor, Mich.) in the D1 state final. The Bobcats completed their fantastic run to the state crown by ending Huron’s dream season with a 45-36 win Saturday night at the Breslin Center in East Lansing.

Grand Blanc, which lost to Carman-Ainsworth on March 12 and split with St. Mary Prep, trialed Huron 40-39 after three quarters, but outscored the River Rats, 16-6, in the final period to bring home the D1 state crown. Neither team shot well from the floor, but R.J. Taylor (15 points) and Timonte Boyd (12 points) put up enough points to help the Bobcats end Huron’s perfect season one game short.

Although St. Mary Prep split with Grand Blanc, it had to drop all the way out of the FAB 50 to make room for the Bobcats, which check in at No. 36. Not only were the Bobcats able to avenge one of their losses against a FAB 50 ranked foe, they were able to beat another one in the state title game.

The nature of Huron’s only loss means it drops two spots in this week’s rankings. It’s a tough break for St. Mary Prep, but since its loss came in the quarterfinal there was just no room for a third Michigan team to stay in the rankings. There is also the factor of considering Catholic Central (Grand Rapids, Mich.) for the FAB 50 after that program won the MHSAA D2 state crown with a 20-0 record. That team was seriously considered for a FAB 50 spot and would be in front of St. Mary Prep in the pecking order of teams from the Midwest Region.

Huron, Catholic Central and other teams also may not be done moving out or moving in the FAB 50 depending on what transpires among teams still playing its basketball season as a spring sport because of COVID-19 related delays.