Four new teams crack the latest FAB 50 National Team Rankings powered by Ballislife.com for the 2020-21 season. There is plenty of movement as well caused by the results at the Heartland Hoops Classic in Nebraska.

RELATED:   “In The Paint” Podcast | The Future Of Big-Time HS Basketball | FAB 50 Rankings Criteria | How To Make A HS Version Of March Madness

While some states continue to wait for their 2020-21 season to tip off, others are entering the playoffs this weeks and in the ones too come. Last week, Michigan’s top teams got rolling while it was reported the Baltimore Catholic League will roll out the balls this week. While Illinois’ season has gotten underway, the start of the season is still delayed for Chicago Public Schools.

One of the greater Chicago region’s top teams entering the season, Notre Dame College Prep (Niles, Ill.), took its first loss last week to unranked Mundelein (Mundelein, Ill.). As a result it was one of four teams to drop from the rankings this week. Expect more drops and movement in the coming weeks as the playoffs get underway and the competition grows stiffer.

There was plenty of movement in this week’s FAB 50 National Team Rankings powered by Ballislife.com and the majority of it was a result of the Heartland Hoops Classic in Grand Island, Neb.

Last week, there was a spirited rankings debate between NIBC member programs Montverde Academy of Florida and Sunrise Christian Academy of Kansas at the top of the FAB 50. At the Heartland Hoops Classic, previous No. 36 Bellevue West (Bellevue, Neb.) gave the No. 2 ranked Buffaloes a good game before falling, 75-68.

Bellevue West makes the biggest jump in the FAB 50 this week, up 14 spots to No. 22, and not primarily because it had a good showing against No. 2 Sunrise Christian Academy, which was playing without point guard and Mr. Basketball USA candidate Kennedy Chandler. The Thunderbirds only other loss is in double overtime to Millard North (Omaha, Neb.), a team they have split with, winning the return game 81-69 on January 29.

Millard North came up with the big win at the Heartland Hoops Classic, knocking off FAB 50 power and then No. 7 Oak Hill Academy (Mouth of Wilson, Va.), 80-76. Millard North’s split with Bellevue West is its only loss so far this season and the big win over Oak Hill causes the Mustangs to also move up 14 spots in the FAB 50, as they crack the Top 25 after holding down the No. 39 spot in last week’s rankings. 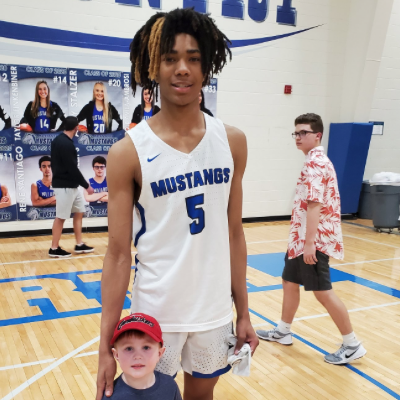 Thomas got Millard North off to the start it wanted by knocking down four 3-pointers, as the Mustangs took a quick 18-5 lead. Millard North led by three points (40-37) at halftime. Oak Hill briefly took the lead in the third period, but Thomas hit free throws down the stretch to seal the win.

Obviously Millard North’s big win helped Bellevue West’s ranking, but neither team was able to make a bigger jump up because Sunrise did play without Chandler and Oak Hill Academy is now six games above .500 after 22 contests. Oak Hill Academy has played its usual murderous schedule (with half of its losses coming against No. 1 Montverde Academy and the No. 2 Buffaloes), but the loss to Millard North causes a 20-spot drop. Oak Hill does own one victory in three games against No. 5 Wasatch Academy (Mt. Pleasant, Utah), but Millard North doesn’t have another win to point to that warrants a smaller drop for the Warriors.

The Millard North-Oak Hill Academy result also causes a ripple affect for La Lumiere (La Porte, Ind.), which is two games under .500. The Lakers have also defeated Wasatch Academy once in three tries, but have lost twice to Oak Hill. That causes La Lumiere to drop to 22 spots to No. 33.

The highest final FAB 50 ranking ever for a team from Nebraska came in 2004-2005 when point guard Josh Dotzler led Bellevue West to a No. 17 final ranking in the FAB 50. That team won their second consecutive Class A state crown.

As far as Oak Hill Academy and La Lumiere bouncing back, it doesn’t appear there will be a conference tournament for National Interscholastic Basketball Conference (NIBC) members as was originally scheduled for March 11-13 in Indiana. It now appears Montverde Academy and Sunrise Christian Academy will have a rubber match to decide the inaugural NIBC title that same weekend.

The game’s winner will also likely grab the top seed at GEICO Nationals, which is scheduled for April 1-3. Because of COVID-19, that end-of-season tournament likely won’t be the final high school games played for the 2020-21 season, as is normally the case, because of the scheduled late starts in a few states.