This All-Star weekend was a memorable one for dunk fans and a landmark one for the professional dunkers who push the art of dunking to new levels.

On Saturday, we witnessed two of the NBA’s best dunkers compete in arguably the greatest dunk off ever, by perfectly executing suggested “YouTube dunks” the professional dunkers have been doing for years. On Sunday, the day of the NBA All-Star game, the most memorable dunk of the night came from not one of the All-Stars, but the man many consider to be the best professional dunker in the world right now: Jordan “Mission Impossible” Kilganon of the dunk organization Dunk Elite.

During a commercial break, the 6’1 Canadian shocked the All-Stars by throwing down his trademark “Scorpion dunk“….IN JEANS! The dunk went viral online – something Jordan’s dunks  have done a couple of times in the past two years – as soon TNT showed the short clip and All-Stars such as Melo, Wade and Bosh going nuts after it.

He even got a high five from Drake. 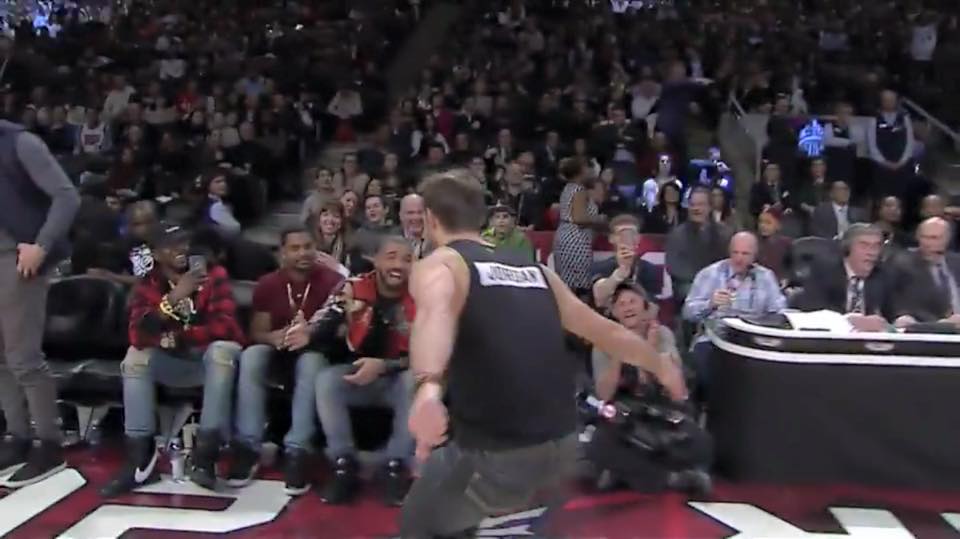 Former NBA All-Star Tracy McGrady even said he wish he could dunk like that.

Here’s another angle of the dunk and a good angle of LeBron trying to figure out what just happened.

What All-Star viewers might not have noticed, is Jordan was referenced a few times during the weekend. On Saturday, the Inside the NBA crew and guest Terrence J raved about the performances by the professional dunkers, including Jordan K, in the upcoming “reality dunk show” called ‘The Dunk King.’

The epic 2 day event was filmed back in 2015 and will air in May. The winner of that event won $100k (more than NBA dunk contest winners gets and 10 x more than the now defunct Sprite Showdown contest) and the winning dunk will become viral gold when it’s shown.

One of the contestants, Zach Jones aka Jonsey – another white dunker who knows a thing or two about going viral – shared the show’s teaser, which also aired on Saturday and featured a cameo by Jordan K.

They released a Sneak Peak on the new TV Show on TNT “Dunk King” featuring me and the Best Dunkers in the world last night during NBA All Star Weekend events! Will air during NBA Finals in May!! #DunkKing #ComingSoon

The Globe and Mail also released a nice feature on him this weekend.